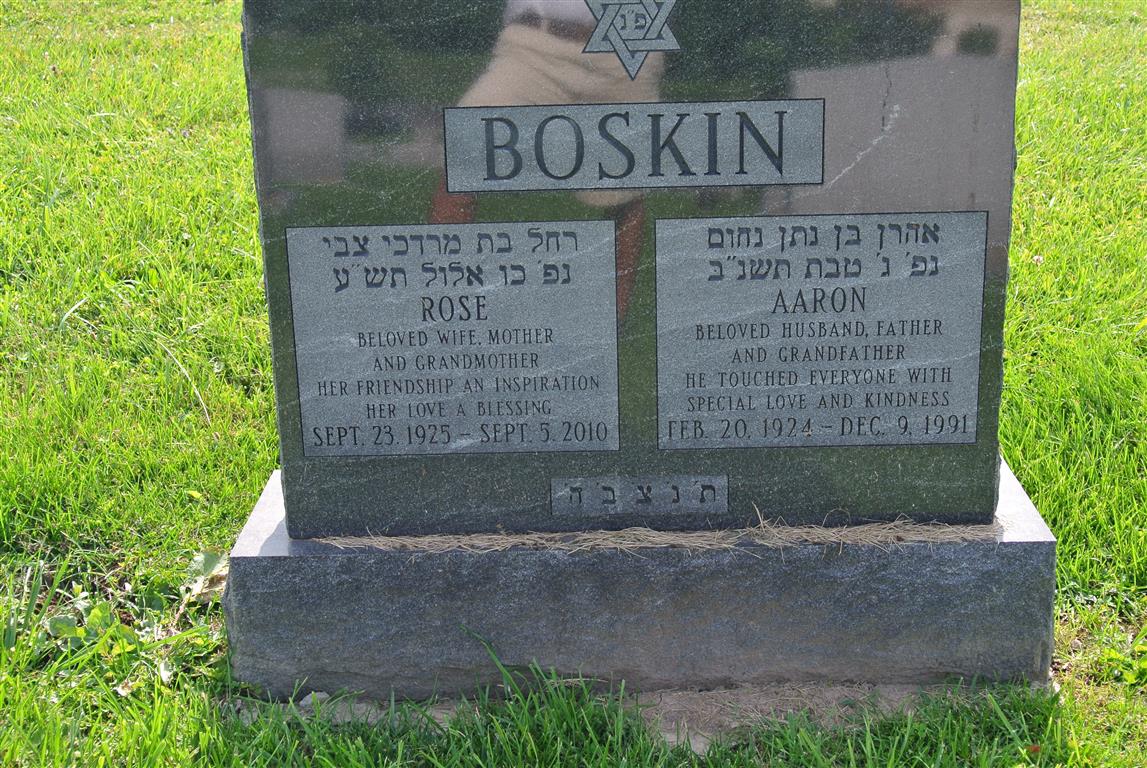 Aaron BoskinAARON BOSKIN, 67 RETIRED RETAILER, DEVOTED VOLUNTEER
After a successful career in business, Aaron Boskin spent 10 years helping the blind. Most recently he and his wife, Rose, were a friendship family to newly arrived immigrants from the Soviet Union. Mr. Boskin died of lung cancer Monday at his home. He was 67 and lived at 5100 Highbridge St., Fayetteville. Mr. Boskin was a life resident of the Syracuse area. He was the son of Nathan and Ida Garelick Boskin , who emigrated from Lithuania. His father owned a shoe store and shoe repair shop in downtown Syracuse. Mr. Boskin grew up on Westmoreland Avenue. It was on his front steps that the Prince Society, a former fraternity at Nottingham High School, was formed. "They stuck together for 50 years," his daughter, Cindy Block, recalled today. After graduating from Nottingham High School, Mr. Boskin was employed as a window trimmer and display person for women\'s apparel shops. In 1955 he opened a women\'s clothing store, Size 5 to 9 Fashions, that specialized in small sizes. "He was the first one that did that. He saw a need," his daughter explained. The business was at three different locations, all on South Salina Street. His wife, Rose, was in business with him. "He started with next to nothing in a tiny little hole in the wall and built it into a great business. He was very customer-oriented. His customers became his personal friends," his daughter said. "He worked seven days a week for 25 years." After retiring from business in 1975, he volunteered at the Pioneer Activity Center, a former workshop for the blind on Lodi Street. He later became a procurement specialist for the agency, seeking work to be assembled at the center. "He devoted 10 years of his life to helping those young people. It became a day and night thing," his wife said. "He would take them on field trips, put their wheel chairs in the car, set them up in apartments. Unfortunately, the agency closed in 1985. "One of the projects he devised were Christmas decorations," she said. "He enlisted Merchants Bank to sell them in its bank lobbies with proceeds to the center. Through that association, the Out of Sight Singers, a group from Pioneer, sang annually at Christmas time in the main lobby of the downtown bank. It was a highlight for the singers." His daughter said her father helped others without seeking the limelight. "That is what people are going to miss." As a friendship family to newly arrived Russian immigrants, she said, "They were like surrogate parents to them and their children, helping them become accustomed to America and reassuring them that people cared for them." After developing a heart condition 10 years ago, Mr. Boskin was advised by his physician to become involved in an exercise program. Since then he participated in the cardiac rehabilitation program at the YMCA. "It became a social club for him," his wife said. Cancer was diagnosed last December. "It has been a long hard suffering year for him. Hospice was involved the last three weeks -- wonderful people," his wife said. Mr. Boskin was a member of Temple Society of Concord. Surviving besides his wife are two daughters, Cindy Block of Manlius and Marlene Groskin of Fayetteville; two sisters, Betty Schechter of Citrus Heights, Calif., and Sally Phillips of Newport Beach, Calif.; four grandchildren, Rebecca Block, Jeremy Block, Jonathan Groskin and Bryan Groskin.; and several nieces and nephews. Services are 11 a.m. Thursday at Birnbaum Funeral Chapel. Calling hours are 10 to 11 a.m. Thursday at the funeral home, 1909 E. Fayette St., Syracuse. After the funeral, friends may call at their convenience at the home of Marlene Groskin, 19 Ely Drive, Fayetteville.
The Syracuse Herald-Journal
December 10, 1991
Family links:
Parents:
Nathan Boskin (1896 - 1957)
Ida Garelick Boskin (1895 - 1954)
Spouse:
Rose Luxenberg Boskin (1925 - 2010)*
*Calculated relationship
burial:
Frumah Packard Cemetery
Burial Location
A8912