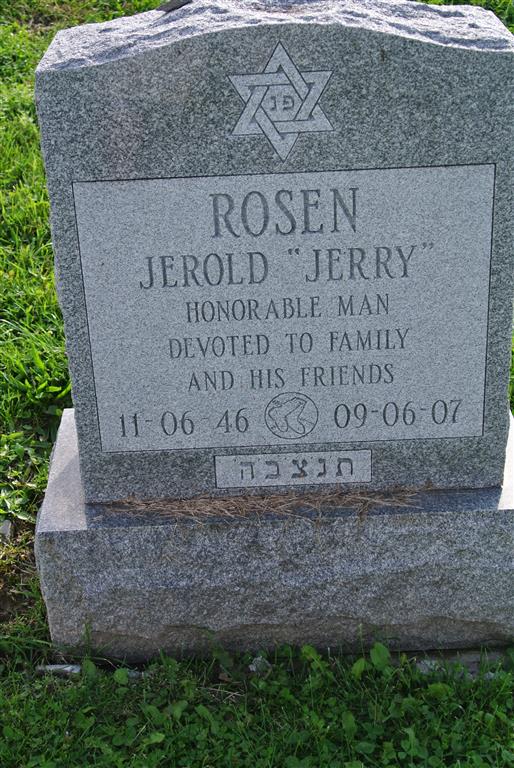 
September 6, 2007 Jerold "Jerry" M. Rosen, 60, of Liverpool, died unexpectedly on Thursday. Born in Somerville, MA, he had been a resident of Syracuse for 30 years. Jerry retired from The Post-Standard this past March after a 30-year career. He wrote "Ask Jerry" and was a writer and an editor for several departments through the years. Jerry was a committee member of the Syracuse Jewish Federation advisory committee to the Jewish CLSTARDAV CLSTARDAV Observer; a member of the board of Ste. Marie among the Iroquois; a former member of Congregation Ner Tamid; and played golf in the Elbow Benders League. Survived by his wife of 40 years, Susan; his sons, Jeff (Trista) and Mark; his brothers, Barry (Carol) and Alan (Annette); his sister, Linda (Ed) Mari; and his father, Sydney. Funeral services will be conducted at 11 a.m. Sunday at Sisskind Funeral Chapel. Friends may visit with the family from 10 to 11 a.m. Sunday at the funeral chapel, 3175 E. Genesee St. Burial will be in Frumah Packard Cemetery. In Jerrys memory the family asks that you do a kindness for someone--"Be a Mensch." Sisskind Funeral Service LLC 3175 E. Genesee St. 4464848
Published in Syracuse Post Standard on Sept. 8, 2007
Burial Location
C561