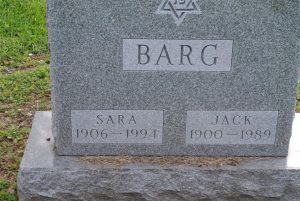 Graveside services for Jack Barg of 113 Alpine Drive, DeWitt, who died Monday at the Jewish Home of Central New York, will be at 2 p.m. Thursday in Frumah Packard Cemetery. After the funeral, friends may call at their convenience at the family home, 113 Alpine Drive, Apt. 10. A native of Poland, Mr. Barg lived in Syracuse 40 years. He retired in 1973 from Upstate Medical Center. He served with the Polish army during World War II and later with the Soviet army. He was wounded while serving in the Polish army. His first wife and son were murdered by the Nazis during the war.
Surviving are his wife, Sara of DeWitt; a brother in Israel; and several nieces and nephews.